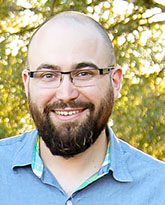 For sexually reproducing organisms, a large part of their fitness depends on how well they compete for and obtain mating opportunities. This “sexual selection” was recognized as a strong driver of evolution by Darwin, and has since been invoked to describe broad scale patterns of biodiversity. Species specific behaviors and preferences accumulate over time and drive the evolution of new species from a single common ancestor, in a process called speciation. How new species are formed remains a fundamental question in biology. The Castillo Lab aims to answer fundamental questions about how natural and sexual selection shape mating interactions and behaviors, species interactions, and ultimately speciation. We use an integrative approach combining population and molecular genetics with behavioral experiments to understand the genetic basis of sexual behaviors and reproductive isolation. We also incorporate comparative genomics of reproductive isolation to analyze repeated evolution of reproductive isolation across the tree of life. By studying the mechanistic and genetic links between sexual selection and reproductive isolation we can determine the influence of these forces on generating biodiversity.