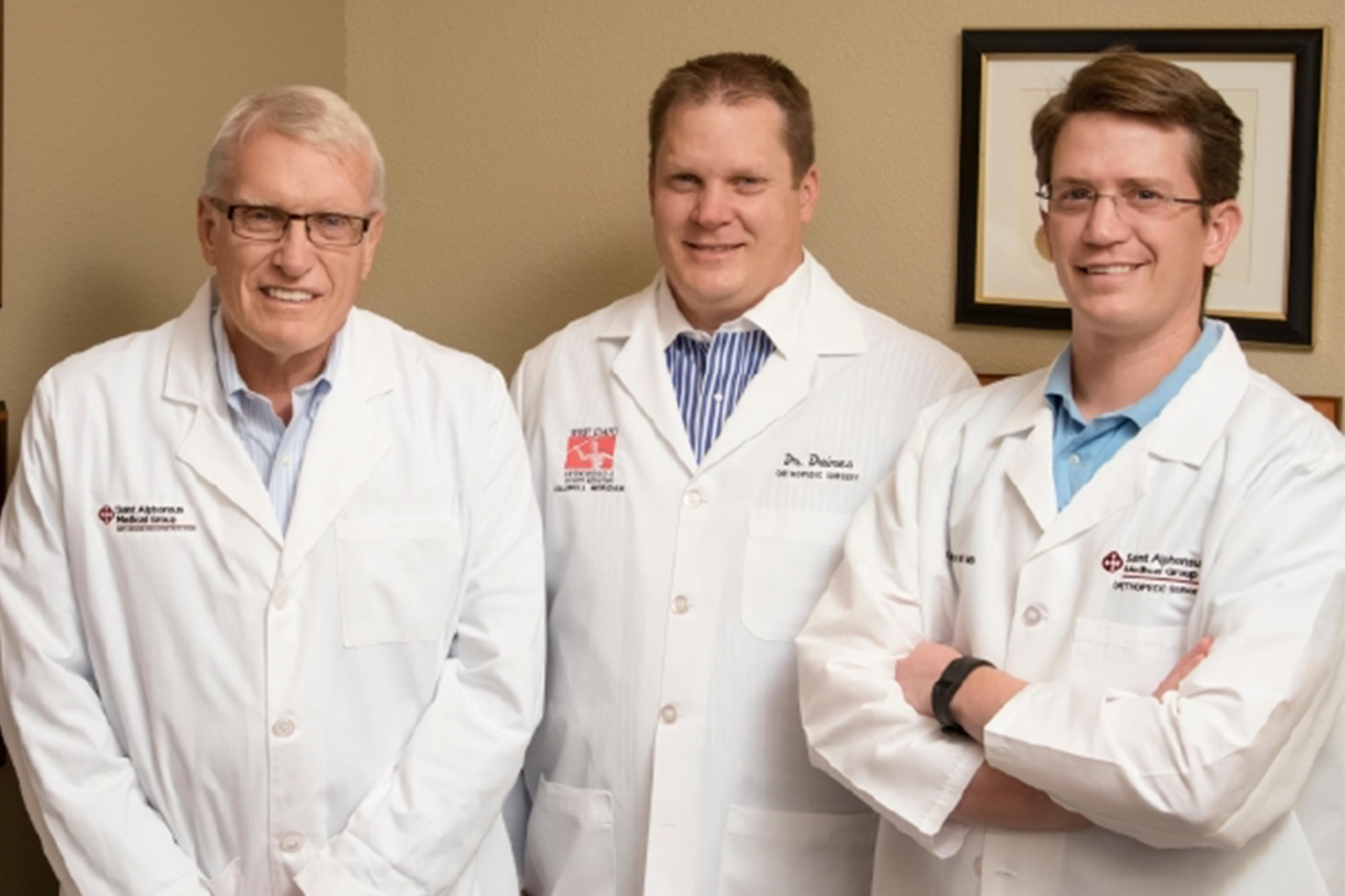 The School of Biological Sciences claims all of our alumni, but sometimes there’s a kind of harmonic convergence that elevates an entire family of U biologists into the spotlight.

Such is the case with the Idaho Daines Family of orthopedic surgeons—Joseph “Pete,”,BS’68; Michael, BS’99; and Brad, BS’05—a virtual dynasty in orthopedic surgery. Brian, who as an undergraduate attended BYU (the U’s traditional rival to the south) also practices orthopedics but in Arizona. The oldest son Gordon was the outlier. He found his passion in history and is now a university archivist with a doctorate in education.

The University of Utah Daines Dynasty goes back three generations, beginning in 1920 when the grandfather of Pete’s wife Susan–also mother to his sons–attended undergraduate school at the U and then went on to medical school in New York City, ultimately returning to the west to start a general medical practice in Preston.

Born in 1945, Pete was at first a math major at the U but changed to biology/pre-med before attending Columbia Medical School followed by an orthopedic residency at George Washington University. His father, who died a year after Pete’s return to Idaho in 1979, also practiced orthopedics in Boise.

Years later Pete’s son Michael would also graduate from the U and head east to medical school at Columbia College of Physicians and Surgeons, followed by a residency in orthopedics at the University of Iowa. Later he was awarded a fellowship to Oxford University to study shoulder surgery for a year. He now specializes in shoulder surgery in addition to general orthopedic surgery at West Idaho Orthopedics near Boise, where he and his siblings grew up.

Not to be outdone by his older brothers, Brad entered medical school at the University of Washington following his graduation from the School of Biological Sciences. Subsequently, he completed a residency at the University of Vermont in orthopedic surgery followed by fellowship training in total joint replacement at the Hospital for Special Surgery/Cornell University. Brad focuses on hip and knee replacement which can include robotics.

For the first few years in practice, his father Pete was his assistant in the operating room. “I ended up not really quitting totally, from practice until 2018,” Pete says. In addition to assisting Brad, he provided medical evaluations for insurance companies, conducted independent exams and wrote up patient histories and reports for attorneys. “To have my dad with me has been an awesome experience” Brad said in a 2016 KBOI 2News story “because he is sort of a calming presence.”

“How does it feel seeing three of your four boys following in your footsteps?” the reporter asked Pete in the same story. “Well,” said the patriarch, “it’s sort of an ego trip, but I think it’s great. I just wanted my sons to do something that they enjoyed.” Says Brad, “Like my brothers, I always thought I was going to be a doctor. I didn’t ever feel any pressure, but I noticed that my dad liked his job.”

Clearly orthopedics is in the Daines Family blood, and clearly the University of Utah’s Biology Department–now the School of Biological Sciences–played a role in the family’s success.

Both Michael and Brad remember the invaluable experience they had in the Biology Undergraduate Research Program (BioURP) with Rosemary Gray, now an emerita faculty. Michael was a research assistant with Sandy Parkinson while Brad found a research mentor in Dave Carrier. “I learned a lot from him about the scientific method,” says Brad. “In addition, because his work did involve animal subjects, I learned much about the balance of the ethical treatment of animals and the need for scientific advancement. We worked with canine subjects, and the length to which he went to ensure good care of these animals was impressive.”

Additionally, Brad really found his groove in the honors program and his upper level biology classes were also an incredible experience, particularly, he remembers, comparative vertebral morphology. Membership in the University Chorus and Sigma Chi fraternity gave him a musical and social outlet.

Both brothers recall the “incredible athletic programs” at the U which gave them a reprieve from the lab and the classroom. Along with sports, there was a love of the mountains and skiing. The combination of the Daines family legacy, recreational opportunities and the academic reputation of the U would converge for a memorable experience for both.

Michael’s research experience in the Parkinson lab was a segue for Columbia Medical, his father’s alma mater. While in New York City, Michael had the singular experience of living through the attacks on the World Trade Center on September 11, 2001. Later, during his Oxford fellowship in the UK, he also worked on several research projects related to the shoulder.

An avid hunter, fisherman and triathlete, Michael enjoys spending time with his three kids, along with his hunting dog “Hawkeye.”

For all of the Daines, there have, of course, been challenges due to the current pandemic, including for Brian in Arizona who, his father remarks, finds himself overworked, doing “everything” related to joint medicine in a small clinic.

“I traveled a lot with my wife,” says Pete, remembering pre-COVID-19 times when he floated European rivers through places like Budapest and Vienna, sometimes through spectacular tunnels 30 miles long. A music enthusiast, he also sang bass in a choir and for five years sat on the board of the Boise Philharmonic. Along with Michael Brad also loves to fish and with his father enjoys music, opera in particular.

While the pandemic has slowed these activities, it has consorted to bring the family, which now includes thirteen grandchildren, closer together. Clearly the spread of the coronavirus has impacted the Daines and their respective medical practices just as it did Pete’s early relatives during the 1918 flu pandemic. “It was a bad pandemic as well,” Pete says, referencing family letters left behind, but “nothing like this one. [Back then] they lost family, this, that and the other thing. It took two years to get past it. That’s what it does. It comes and turns your life upside down.” Even so, he says, the earlier pandemic didn’t keep people out of work as much as the current one.

Says Michael, “I have had to navigate the need to care for patients and also keep my office staff safe. As a small business owner, we have had to find creative solutions to keep people working and keep the doors open.” Brad, too, has had to make the adjustments to the way he works.  “Life is always uncertain,” he says, referring to the past year. His advice? “Remain flexible and do the best you can every day. Embrace the fact that life will take you down unexpected paths. Upon reflection, many of the best things in my life happened when my plan deviated.”

Michael agrees: “Take your opportunities when they come up and have no fear!”

Will the Daines tradition of orthopedic surgery carry on into the next generation? “I think there’s going to be some of my grandkids going into medicine,” says Pete. “It probably isn’t going to be the conglomeration [of a medical life] like I got. I don’t know how that happened,” he quips, referring to three-fourths of his progeny who are surgeons.

“They just wanted to go and they did. Back then I could take my kids into the operating room with proper supervision and they could watch things. You can’t do that now. It’s not allowed. I had that opportunity to have some stuff in the operating room and I think that cemented for them going into medicine…. I didn’t mean for them to all become doctors, but that’s what happened. I’m very proud of them.”

As for Brad, his children are still too young (7 and 5) to have shown any interest in a career in medicine– yet.”