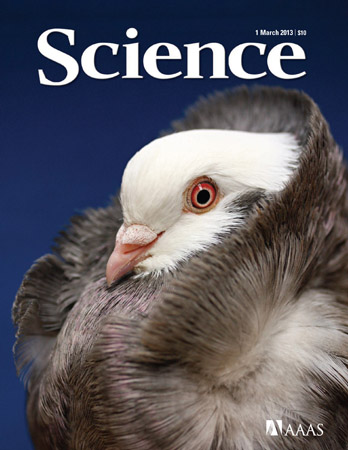 The photograph was taken by graduate student Sydney Stringham, from the lab of Michael Shapiro at the University of Utah. And although Salt Lake City has its own yearly pigeon shows, sometimes you have to go far afield to get the bird you need. A few years ago, Sydney traveled with her advisor to a large pigeon show in Germany, to collect samples for pigeon population genetics projects. In the process, they also got some inside information on the art of avian portraiture from a professional pigeon photographer. “I had no idea such a thing existed,” Stringham says, “but we ended up spending some of the day with this photographer.”Stringham pursues photography outside of the lab and was especially interested in the professional's setup: a small cage that acted as a portable "studio." When the opportunity arose to photograph a pigeon for an upcoming publication, she turned the lab's break room into a pigeon photography studio, using similar techniques. “We grabbed the biggest box we had sitting around the lab,” she says, “and cut the top off of it so we could get some light from the top; stuck the bird in and put some construction paper behind him.”For professional pictures, the focus is on capturing the whole bird, so that characteristics of the breed standard, such as the bird's posture, are visible. But instead of photographing the bird head-to-toe, Stringham focused on the bird's face and neck, using a lens and techniques more typical of portraits—her favorite style in her personal photography. “This breed, they just seemed to have such a particular personality,” Stringham says. “I really wanted to get close and just show that.

The geographic origins of breeds and the genetic basis of variation within the widely distributed and phenotypically diverse domestic rock pigeon (Columba livia) remain largely unknown. We generated a rock pigeon reference genome and additional genome sequences representing domestic and feral populations. We found evidence for the origins of major breed groups in the Middle East and contributions from a racing breed to North American feral populations. We identified the geneEphB2as a strong candidate for the derived head crest phenotype shared by numerous breeds, an important trait in mate selection in many avian species. We also found evidence that this trait evolved just once and spread throughout the species, and that the crest originates early in development by the localized molecular reversal of feather bud polarity